Fleas and the Meaning of Life 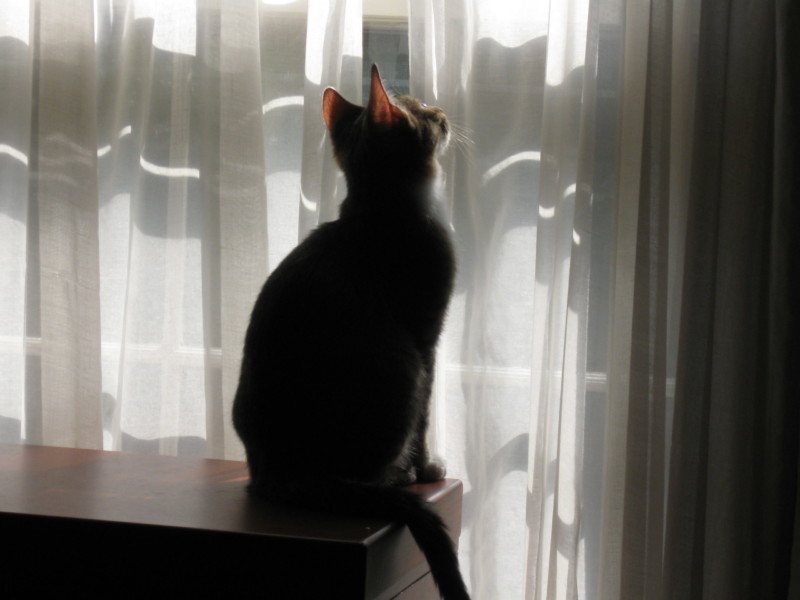 From time to time this website will feature a guest blog written by Black Magic, the virtual cat who lives in my head. He is the grandson of Black Jack, the remarkable cat who authored Autobiography of a Georgia Cat. Here is his first contribution. I hope you enjoy it.

So, it has been very wet outside the last few days. I have been getting soaked just walking across the grass.  I just got back home and gave myself a good washing. At least I don’t have to worry about fleas. I get some medicine every once in a while that protects me from the little buggers. My mother used to say that fleas are one of God’s mistakes. They are incredibly vexing at best, and they spread serious disease as well. But of course, God has really not made any mistakes. The universe is created in such a way that every environment invites life. So, if there is a niche, living things fill it, and not only that, but they compete with each other for the space. Things will live where one would never imagine that anything could survive. From the bottom of the ocean to coldest environment at the tallest mountain tops, there are things that live. Or so I am told. I hear a lot of speculation about whether there are other worlds where life exists now or whether it has existed in the past. Humans are working their way towards an expedition to Mars. There is probably nothing alive there now, but I would be surprised if there hasn’t been life on Mars in the past. There must be millions of places in the universe where life has existed, does exist, or will exist. It is only either people’s arrogance or lack of imagination that leads them to believe that this planet of ours is the only one where life can be found. This is the same sort of arrogance and lack of imagination that leads people to believe that they are the highest life form on earth. What doubt could there be that cats are the most advanced of all God’s creatures, at least spiritually?

Our neighbor at the end of the block has just walked by, walking his cat, Pinky. When I say he walks his cat, I mean that he walks, and he carries the cat. This is rather amusing, don’t you think? Some of the neighborhood cats think that Pinky is aloof because she never lets her paws touch the ground. But I believe she is not so much aloof as aloft. I think it is part of her guardian’s strategy to keep her from getting the above-mentioned fleas. Most cats would never allow themselves to be carried around like a loaf of bread, but she seems to tolerate the experience, if not enjoy it. It is funny how different we cats can be in our personalities and retain such commonalities at the same time. By the way, some people object to the use of the word personality referring to cats, because cats are not people. But the word is not people-ality, it’s personality. I think every living thing that has a sense of itself can be thought of as having its own personality, and humans can just get over it. People think that just because it appears to them that they are the only truly sentient beings this makes them special. They think that they’re the only beings that think about the fact that they think about themselves, who they are, where they came from, and what it all means. I think the people who achieve the greatest enlightenment are the ones who are the most like cats. Watch a cat meditate sometime, and you’ll get an idea of what I mean. It is only in any given present moment that one can be in direct contact with the universe, and by extension, with the Master of the universe. Think about it—and enjoy the moment.