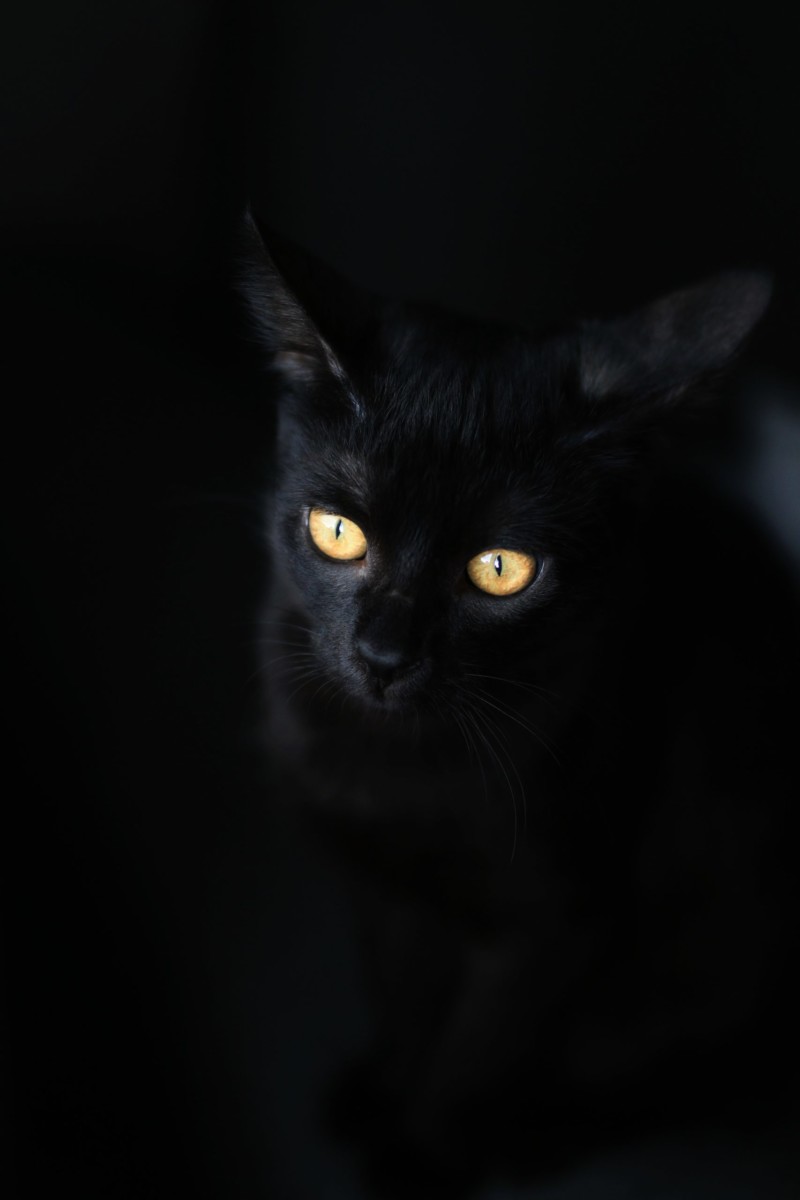 Here is another guest blog from Black Magic.

So, as I was walking home this afternoon from my inspection of the neighborhood, once again I found Nevermore (our neighbor’s black dog) stretched out in the middle of the street, sunning herself. This is not the most intelligent behavior imaginable, even for a dog; but the people who drive down this street know her tendencies. So, she has yet to be hit by a car, no thanks to herself. But it got me to thinking about black dogs.  Not everyone is aware that black dogs are euthanized at a much higher rate than lighter-colored dogs, because they seem to be passed over by potential adopters, consciously or unconsciously, because of their blackness.  In the British Isles there is an extensive folklore about black ghost dogs that haunt locales and bring about sickness and death to the people who live in their environs. This mythology was the basis for Sir Arthur Conan Doyle’s story, The Hound of the Baskervilles, which featured a monstrously big, vicious, coal black dog. In fact, the color black is heavily represented in folklore and mythology as representing evil, Satan, the devil, and death. In the animal world we make no distinction of value based on color. (Dogs, poor things, can’t even distinguish color, just levels of brightness, and shades of gray.) But people, with their limited spiritual and moral awareness, seem to make color an issue of significance. You may have read the poem “The Raven”, by Edgar Allen Poe. It is a famous, wonderfully musical poem that deals with the grief of a young man whose girlfriend, Lenore, has died. He wants to stop thinking about her, and at the same time he wants to know if they can be reunited in Heaven. He is visited in the middle of the night by a large black bird, a raven, who comes tap, tap, tapping at his door. He thinks the bird is a prophet that can answer his questions, but all the bird will say is “Nevermore.”  There are strong undertones of mystery, death, and evil in the poem.  It can hardly not be noticed that the bird is black. If the bird was white, green, or blue, it wouldn’t be the same poem. If the name of the poem was “The Great White Heron”, or “The Black-throated Blue Warbler”, nobody would ever read it.

I would be remiss if I didn’t point out that black cats also are passed over at shelters and subject to a higher risk of euthanasia. Black and brown people seem to also be subjected to being discriminated against. For example, many years ago when Michelle (Mike’s daughter) was in the 3rd grade, she was passed over by her (white) teacher and not recommended to participate in the honors class. She told her (brown) mother who marched down to the school and demanded to know why the teacher didn’t think she was smart enough. Michelle was tested and got into the class. I am not exactly sure how smart Michelle is, but I do know she is smart enough to be a professor now at a major university. Racial and ethnic differences have the potential to make life so interesting, but also lead to discrimination and wickedness. All too often the people that have power fear that people who are unlike them will take over or at least take some of what they are trying to hold on to. Fear-based competition for limited resources is the basis of all political struggles.

But back to black dogs. I have heard a rumor (I can’t reveal my source) that animal control is considering making all black dogs register. They claim that it is only to help them document the population needs, trends, etc., but on the streets we suspect a more nefarious motive. I have strong feelings about this, not so much because I am crazy about black dogs (or any dogs), but more because it is morally corrupt to stigmatize groups based on such a superficial characteristic (or for any other reason). And if this is allowed, the next thing would be an attempt to register black cats. I am certain there are people who would sleep well at night if all the black cats in the world were exterminated. So, I have decided to speak out. My first step is by writing this piece. I also plan to be first in line to register as a black dog if the program (I almost wrote pogrom) is instituted. Mike told me he will take me down to animal control to register, and I think he will register himself as well. We are not going to take this lying down, in the middle of the street or anywhere else. I invite you to join me.